Halloween started with, appropriately enough, my own Saturday morning cartoon mix for my daughters. I wanted to sample some of the shows I used to watch around their age that influenced my love of horror.

The Real Ghostbusters 2.08: "Night Game" (1987) directed by Marek Buchwald & Masakazu Higuchi
The design of Slimer was truly a blessing for the cartoon show. With the movie establishing that ghosts could look nothing like a simple transparent human, the cartoon was free to let their creativity flow in any direction they felt like. We get a good dose in this episode, which features a surprisingly calm Winston playing in a spiritual baseball game populated by all sorts of weird critters.
,

The Real Ghostbusters 2.09: "Venkman's Ghost Repellers" (1987) directed by Marek Buchwald & Masakazu Higuchi
I've always loved the surrealism in this show. In this episode, the boys go on a rescue mission into the New Jersey Parallelogram, which is like the Bermuda Triangle, except with "more suburbs," It actually looks more like they are floating inside of tie-dye T-shirt, with bizarre origami-shaped dragon creatures chasing after the lost ships. Fun.

Ghostbusters 1.07: "Mummy Dearest" (1986) directed by Ernie Schmidt
I hadn't watched Filmation's Ghostbusters since, well, 1986 when it first aired. I didn't care for it then. In comparison to the movie-inspired The Real Ghostbusters, it was clearly inferior. The two ghostbusters of this show live in a haunted house inexplicably filled with sentient skeleton-themed furniture. They also take an intelligent gorilla named Tracy with them on their adventures, which they travel to using a sentient ghost car that looks like Chitty Chitty Bang Bang and can transform into a jet-thing. It's typical Filmation crap, in which every episode they fight a Skeletor-like villain named Prime Evil who appears to be a mix of ghost, skeleton, and robot. It's standard '80s cartoon fare that pales in comparison to the creativity and, sometimes, depth found in the other show.

This episode has Prime Evil sending his idiot -- seriously, he speaks like he has brain damage -- mummy henchman to the Middle East to scare away all of the oil field workers. Yep. He wants to stop the flow of oil from the Middle East in order to destabilize the world (which he rather unimaginatively pictures as freeways packed with out-of-gas cars, as if people would continue to drive around during an extreme oil crisis until they literally ran out of gas on the way to work). Yeah, just stupid Skeletor-style stuff that the good guys stop using a car wash (really).

Ghostbusters 1.01: "I'll Be a Son of a Ghostbuster" (1986) directed by Tom Tataranowicz
Well, the girls dug the show and wanted to see the first episode in case they explained how all of this craziness came to be. It does, and begins with the dads of the two main characters attempting to teach them the art of ghostbusting. The most bizarre take-away from this episode is that both Prime Evil and the ghostbuster's haunted car have the ability to time travel. That would make for a short series had that been taken to its logical conclusion.

The 13 Ghosts of Scooby-Doo 1.01: "To All the Ghouls I've Loved Before" (1985) directed by Ray Patterson
At the age of seven, I loved this iteration of Scooby-Doo. I believe it was the first version of the show in which the monsters were real, which I thought was cool. Plus, the 13 ghost spoken of in the title tended to be a little scarier than normal cartoon fare, being terrible demons (or ghosts, they call them both) who are released from a creepy treasure chest by the idiot titular dog. It also features the venerable Vincent Price in cartoon form, as the mystic Vincent Van Ghoul, who is awesome. On the other hand, the show also doubles-down on the annoying characters. Not only are Fred and Velma missing, they are replaced by Scrappy-Doo and an extremely annoying little kid named Flim Flam.

The 13 Ghosts of Scooby-Doo 1.02: "Scoobra Kadoobra" (1985) directed by Ray Patterson
After releasing the 13 ghost, they group have to track down their first ghost/demon. This one gets a little sillier than the first episode, with the gang's antics approaching Looney Tunes goofiness at times. During one bit, they cut to a parody news cast in which Shaggy and Scooby berate an old lady complaining about danger of the episode's dragon who was breathing fire. I'm guessing the creators of this episodes were having some issues with standards and practices and needed to vent (the dragon fire remained, but it is green in color).

The Adventures of Ichabod and Mr. Toad: "The Legend of Sleepy Hollow" (1949) directed by James Algar & Clyde Geronimi & Jack Kinney
We skipped the non-seasonal Mr. Toad bit of the movie and moved directly to the Ichabod Crane section. It's been a little while since I've watched this. Interesting how Disney chose to present the story. Ichabod is pretty much a complete ass in this version. He cares nothing for anyone other than himself and only interacts with people if they can offer him something. This mostly results in him attending various societal functions in order to gobble as much food as possible. When the attractive, single Katrina appears -- the daughter of a wealthy farmer -- Ichabod uses all of his tricks to get into her good graces and to screw up the strapping, handsome Brom's shot with her. However, Katrina's continued sidelong glaces at Brom confirm that she has already made her choice and is merely enjoying having the two fight over her. In the end, Brom -- presumably -- has to scare the scam artist right out of town in order to win his bride. There's a lot of interesting truth buried in here. 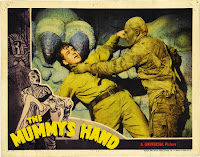 My youngest daughter, remembering watching The Mummy last year, wanted to watch "Mummy 2" this year. That works for me: I always try to watch at least one Universal monster movie every Halloween. Admittedly, the Mummy movies are my least favorite of the Universal stable. They tend to be very dull and the mummy himself is never very interesting. This one, at least, has some entertaining characters in the form of Brooklyn charlatan Babe and magician The Great Solvani.

But, man, the mummy in this one dies in the most pathetic manner of any movie monster in the history of horror. The mummy requires tea made from the leaves of a special plant in order to continue to live. In fact, the mummy is so addicted to this stuff that he'll sniff it out where ever it may be (usually, placed in the good guys's tents by the bad buy). In the finale, the bad guy cooks up a mega-batch of tea that the mummy slowly shuffles towards. The hero of the picture easily knocks the tea bowl over before the mummy can get to it and the poor, pathetic addict of a mummy ends up kneeling down into the dirt to suck the tea off the ground. This allows the hero to easily knock a candle onto him to burn him up. Kids, don't do drugs!

Earlier in the film, the bad guy states that the mummy requires three leaves per day in order for his heart to continue beating. The bag guy is part of a long line of bad guys who have sworn to feed the mummy his leaf medicine every single day for the past 3000 years. Just how many leaves would that take, I wonder? Well, that's a long, long time to be using leaves. Turns out they would've need to stash 3.3 million leaves in the mummy's tomb to supply him for that long. No wonder the plant went extinct!

The next best thing to a new Trick 'r Treat movie, this is a horror anthology film with 10 different stories in it. Like any anthology flick, it's a mixed bag, but there are definitely more gems than duds in this one. Overall, I liked the movie quite a bit and hope it becomes an annual or semi-annual series.

As always, Halloween on Halloween. Random things I noticed this time out:

Donald Pleasence's accent is weird in this one. He's trying to speak with an American accent, but not very hard. It's actually pretty effective, giving the guy a strange manner of speaking to match his strange personality.

The dead leaves they spread on the grass in some scenes in order to make Southern California look like Illinois in autumn has the bizarre effect of making the movie seem slightly outside of reality. But, it's also a little like being able to see the zipper on the costume of a 1950s horror movie monster.

Right before being shot by Loomis, Michael's face is revealed when Laurie yanks his mask up. We can see he's a regular-looking young man. Why give us a glimpse of Michael's right at the end of his reign of terror? I think it was one final nudge to make the character as scary as possible. He starts by merely stalking. That escalates to hiding and jumping out of the shadows to murder. That is intensified by his apparent immunity to both pain and serious injury. Where can you go from there? You show that underneath the expressionless, ghostly mask lies a regular person. Michael could be anyone in your neighborhood. Beware.

And that's it for this year's Six Weeks! Thanks for reading!
Posted by Kernunrex at 23:59