Tales from the Crypt: "Yellow" (1991)
This big big-budget tale of the horrors of World War I, though not exactly a traditional TftC story, was a great finisher for season 3. (7/10)


The Shining (1980)
It's feels like a horror movie made by someone who'd never watched a horror movie in his life, or intentionally tried to ignore the traditional conventions, or thought he could create new conventions. (9/10)


Masters of Horror: "The Washingtonians" (2007)
Everything outside of the Washintonians themselves was played far too seriously to match the utter goofiness of the cannibal cult. (5/10)


This Halloween, I was joined by Mrs. K and C. Once again, the upstairs lights were kept off. Sorry kids: movies are more important than handing out free candy. A feast of pizza, Beck's Oktoberfest and Halloween cupcakes were enjoyed by all (well, Mrs. K had to stick to that god-awful O'Doul's).

I saved the three glass bottle flavors of Jones Soda's Halloween flavors for Halloween night. Monster Mojito still tastes to me like the alcohol drinks served in college that make you vomit. It's not really a flavor I crave in a carbonated, stand-alone form. Dread Licorice tastes exactly, exactly like liquid red licorice. It's not bad. If you've ever used a red licorice whip as a straw when you were a kid, the experience is similar. It's fraternal twin, however, is awful. I knew Black Cat Licorice, the black licorice-flavored drink, had the potential to be pretty bad. It was. Even though I'm one of the rare people on the planet who actually likes black licorice candy, I couldn't even finish this one. I addition to the liquid black licorice flavor, it leaves the distinct aftertaste of skunky beer on your pallet once you swallow. Not pleasant. Of this year's seven flavors, it's the only one I couldn't drink. Compared to other years, this is actually an improvement for the Jones company. Maybe they can make 7/7 good ones in 2008? 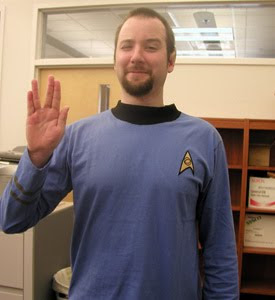 I decided to dress as Mirror Universe Spock for work this year. I know, I know. Evil Spock didn't wear that type of uniform shirt. You can dock me 10 points from my geek account. No one would've ever have figured out who I was suppose to be if I tried to duplicate Evil Spock's weird, shiny blue shirt-with-sash thing. In fact, no one did figure out the whole evil part. Despite the goatee and that one South Park episode that emphasized the idea of evil facial hair, no one guessed that I was the evil version of Spock. Ah well. I knew.

It's always interesting to hear what people will say to you when you're dressed up. Especially since most of the people at work don't wear costumes. Those of us in disguise were in an exclusive club; we acknowledged each other's shared experience when chatting in hallways, lamenting everyone else's lack of holiday spirit. Memorable comments from the non-dressed-up folks included:
There were also many Vulcan salutes directed my way, plus many smiles as people recognized who I was dressed as. All in all, it was fun. And, damn, those uniform shirts are comfortable.

And, that's it! My Six Weeks of Halloween celebration is over. I didn't watch as many movies, nor eat as much candy, as I did in years prior. That's fine. I had fun and maximized my enjoyment of this, the last child-free Halloween of my life. Next year: making a goofy costume for the kid, and reading kid Halloween books as bedtime stories are what I'm most looking forward to.
Posted by Kernunrex at 05:00 3 comments: