A Nightmare on Elm Street 3: Dream Warriors (1987) directed by Chuck Russell
Freddy vs. Jason IX: Destruction of the Dream Warriors
The Dream Warriors fail miserably in this film. Granted, it wasn't a bad thought on Nancy's part: figure out a special power you have when you dream and use that against Freddy. In such a desperate situation, it was worth a try, but the results speak for themselves:

The only thing that has any lasting effect at all on Freddy is Neil sprinkling holy water on his bones in the real world. Even there, Neil almost dies due to Freddy's skeleton bonking him on the head with a shovel. Freddy is incredibly powerful: a god in the dream world who can extend himself into reality when needed. If it were me? I'd be eating Hypnosil™ the rest of my life and moving away from Springwood. 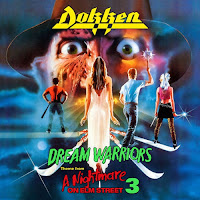 I've always had mixed feelings on this entry in the series. Widely regarded as the best of the sequels, it also marks the beginnings of "Wise-Crackin' Fred," the slasher villain who feels the need to make a clever quip -- like he's James Bond -- before killing someone. To me, that can get irritating. I think it would work a little better if he were a little darker with his quips. I like "this is God" and "I'll split you in two" from Part 1 just fine. "Welcome to prime time, bitch!" and "what a rush!" just don't have the same utter malevolence behind them. Freddy isn't as scary if you're half-chuckling at what he's saying to people. This also puts the character on a destructive path, where each sequel gets a little sillier until we end up with "Stand-Up Comedian Fred" in Part 6.

Outside of that complaint, this is a great sequel. While somehow not as strong as she was in Part 1, it's nice to have Nancy back. Dreams also return after being mostly absent in Part 2, and they get a lot right with them. I like that they play with the geography of Nancy's old house: the hallways seem to shift and extend themselves, and nothing makes any logical sense. The bit where Kristen finds she can no longer run as Freddy chases her is great. This is all very true-to-dreams. Freddy also has more fun with his dream powers than ever before: he transforms into a snake and a marionette, multiplies himself in mirrors, and attacks Zsa Zsa Gabor on a TV show. He seems to be enjoying the hell out of himself during the entire movie, particularly when he's playing possum to allow the kids to think they've actually hurt him.

Favorite Character
Donald Thompson (John Saxon): broken by the events of Part 1, he's turned into an alcoholic security guard who rarely sees his daughter. He snaps back into his old self during his final moments when he attacks the animated, burned skeleton of Freddy, telling him "I've killed you once before, you son of a bitch."

Favorite Sin
Making out with a dream version of a nurse who is actually Freddy in disguise.

Favorite Kill
Phillip (Bradley Gregg), who has his arms and legs sliced open by Freddy. Freddy then uses Phillip's own tendons to marionette him off a building. I've always thought this is one of the most disturbing Freddy kills for shear gore factor alone.